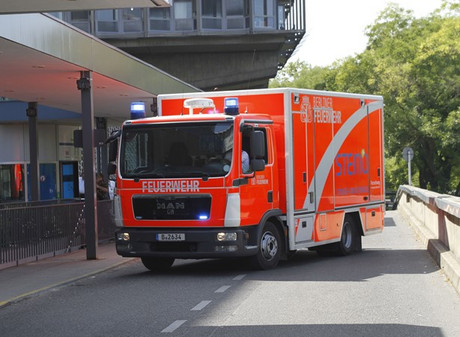 When treating a patient with stroke, every minute counts. A specialized stroke ambulance (Stroke Emergency Mobile or STEMO) allows physicians to start specific treatment, such as thrombolysis, at scene.  A recent study conducted by researchers from Charité – Universitätsmedizin Berlin investigated whether this earlier response time leads to an improved prognosis. Patients who received the appropriate treatment during transfer to the hospital were less likely to have a disability three months after their stroke than patients who received conventional treatment. Although the difference in surviving without any disability slightly failed to reach the predefined level of significance, other outcomes such as severe disability or death were also more favorable in the STEMO group. Results from this study have been published in the journal The Lancet Neurology*.

Approximately 90% of strokes are ischemic strokes, i.e. they are caused by a blood clot blocking an artery in the brain. Arterial blockages of this kind can be dissolved by thrombolytic therapy. However, approximately 10% of strokes are caused by bleeding inside the brain (hemorraghic stroke). As such bleedings would be unstoppable under thrombolytic therapy, it is essential to exclude cerebral bleedings before starting treatment. Physicians achieve this by using computed tomography (CT) for brain scanning, usually in hospital.

Led by Prof. Dr. Heinrich Audebert, clinical lead of the Department of Neurology at Campus Benjamin Franklin, the researchers studied whether early thrombolytic therapy influences the patient's subsequent degree of disability. This was done by comparing the outcomes of patients who received thrombolysis after being transported to hospital in a conventional emergency vehicle and those patients who received thrombolysis already inside the STEMO. Patients from both groups had their degree of disability assessed three months after stroke.

“Our results suggest that earlier thrombolysis, delivered in STEMO already before hospital arrival, results in fewer disabilities that affect daily living, and in better survival rates,” says the study's first author, Dr. Alexander Kunz. He adds: “The earlier acute stroke treatment starts, the better the outcomes. Data from our study suggest that, wherever possible, treatment should commence prior to arrival at hospital.” Early treatment of this type is made possible through specially-equipped mobile stroke treatment units, such as the STEMO, which is jointly operated by the Berlin Fire Department and the Center for Stroke Research Berlin. The ambulance, that is equipped with a CT scanner and a mini-laboratory, is staffed by a neurologist who is also trained in emergency medicine. A previous study by the Charité researchers had shown that patients treated in the STEMO received potentially life-saving thrombolysis on average by 25 minutes earlier compared to patients who were admitted by conventional ambulance and treated after hospital arrival.