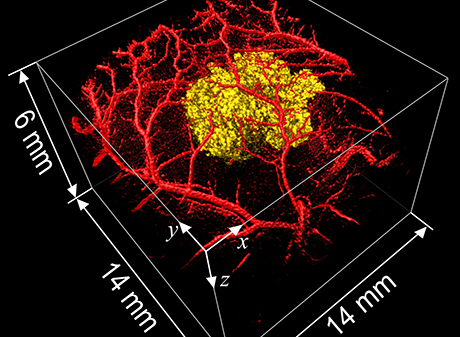 Tumor cells produce their own contrast

Photoacoustic imaging makes it possible to visualize cells and tissues as three-dimensional images. In the past, this technique has been used mainly to visualize blood vessels. However, tumor cells are transparent and therefore almost invisible. Scientists at the Charité – Universitätsmedizin Berlin, TU Berlin and University College London have now genetically modified tumor cells in such a way that the cells are able to produce the natural pigment known as melanin. This in turn provides the absorption contrast required for photoacoustic imaging while a newly-developed scanner makes it possible to detect cells in the deep tissue regions. The results of this interdisciplinary study have been published in the current edition of the journal  Nature Photonics*.

High-resolution images are the result of photoacoustic tomography methods. This methodology combines the benefits of both optical and acoustic imaging techniques. Short light pulses illuminate a tissue where the pulses are absorbed and converted into ultrasound waves, the amplitude of which depends on the type of tissue and the pigments it contains (e.g. vessels, muscle or tumor tissue). Sensors on the tissue surface, such as the skin, are then used to measure these waves. From these data, it is possible to reconstruct 3-D images using special computational algorithms. In contrast to conventional ultrasound, the acoustic emissions are generated within the tissue - a process also known as the photoacoustic effect. The scattering of acoustic waves on their way through tissue is significantly weaker than that of the scattering of light. This makes it possible to generate high-resolution spatial images of the distribution of the tissue chromophores.

Dr. Jan Laufer, Head of the Photoacoustic Imaging Group at the Institute of Radiology of the Charité and the Institute of Optics and Atomic Physics of the TU Berlin, have in collaboration with the Photoacoustics Group at University College London developed an innovative, highly sensitive photoacoustic scanner that can measure ultrasound using optical technology. The extremely small detectors enable the reconstruction of very high resolution 3-D images of living organisms, reaching imaging depths of one centimeter. By comparison, purely optical technologies such as microscopy or optical coherence tomography extend to depths of around one millimeter. In addition, the researchers have developed new procedures to reconstruct and analyze the data, innovations which in turn have improved the quality of the generated images.

Molecular imaging utilizes the different absorption spectra of the various chromophores: the absorption of the colors of light in hemoglobin for example - the red blood pigment – is different to that in the pigment melanin. In order to detect the nearly transparent tumor cells, cell biologists in the research group have modified the genetic information of the tumor cells in such a way that they produce light-absorbing melanin, i.e. the cells generate their own contrast agent. In fact, the genetically modified cells not only produce the pigment melanin, they also pass on their genetic information to the daughter cells. "The combination of permanent contrast produced by the cells and high resolution, deep tissue images provided by the all-optical scanner enabled studies of tumor development in a non-invasive manner over a period of  several weeks in the same organism”,  is how Dr. Laufer explains the findings.

This method opens up a wide range of application for photoacoustic imaging in the life sciences, for instance by facilitating studies of the cellular and genetic processes in tumors during their growth or in response to therapy. The ongoing development of photoacoustic imaging and reporter gene technology now being carried out by scientists at the Charité and TU Berlin is supported by a Starting Grant from the European Research Council.