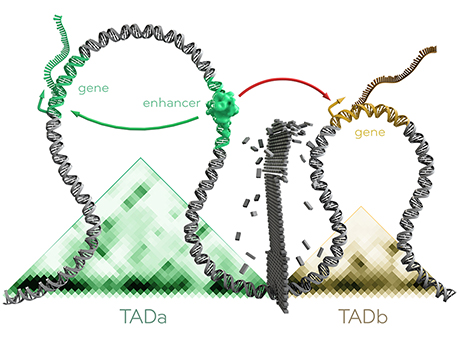 Scientists at the Charité – Universitätsmedizin Berlin and the Max Planck Institute for Molecular Genetics (MPIMG) have discovered that disruptions of regulatory functional units of the genome can lead to disease causing abnormalities in the regulation of the related genes, exemplarily demonstrated in three rare, genetically-caused diseases in humans. The genome is divided into sub-units, the so-called TADs (topologically associated domains). These longer DNA segments represent functional units that contain one or more genes in addition to the related regulatory elements that control their expression. The pivotal importance of boundaries that separate one TAD from another are described by the researchers in the current edition of the journal Cell*.

The human genome comprises approximately 20.000 genes, but they are encoded by only 1.5 percent of the genome. It is estimated that around 40 percent of the non-coding genome is required for the regulation of our genes. However, how this is achieved and how the specificity between regulators and genes is accomplished is a matter of intense research. Recent discoveries show that the genome is divided into functional units, the TADS. Within a TAD, the regulators limit their activity to the genes that are contained within this TAD; conversely, genes in neighboring TADs are shielded from this activity. Scientists at the Charité – Universitätsmedizin Berlin and the Max Planck Institute for Molecular Genetics (MPIMG) have now shown that changes, particularly those occurring at the outer boundaries of the TADs can cause significant disruptions in the regulation of the genes, thereby contributing to the emergence of disease. As a result, not only the genes themselves can be responsible for disease, but also the changes that occur in regions located far away in non-coding regions due to a disruption of DNA-folding and thus the three-dimensional structure of the genome.

Prof. Dr. Stefan Mundlos, Director of the Institute of Medical Genetics Human Genetics of the Charité and his team of scientists focused their investigations on three rare genetic diseases, characterized by abnormalities in the bones of the hand and feet. Structural changes – rearrangements of large pieces of the genome – were shown to cause these conditions. "The search for such changes is a standard procedure in the diagnoses of genetic diseases. However, it often remains unclear whether or not they are in fact the real cause", Prof. Stefan Mundlos explains. "We hypothesized that the immediate environment of a gene – over a distance of up to several million bases – has a strong impact on the proper functioning of a gene." Until know it was thought that the malfunction of a gene was mainly caused by changes of the gene itself.

The latest research findings can now serve as the basis for an entirely new understanding how genomic changes can cause genetic diseases. Structural changes can result in the destruction or re-positioning of boundaries, segments of the genome that function as protective 'firewalls' between TADs. This elicits changes in the composition of the TAD, making it now possible for elements to interact, which were previously strictly separated from each other. As a consequence, the genes are improperly regulated leading to the described skeletal malformations. This principle is likely to apply for many other conditions and may also be a major disease mechanism in cancer.