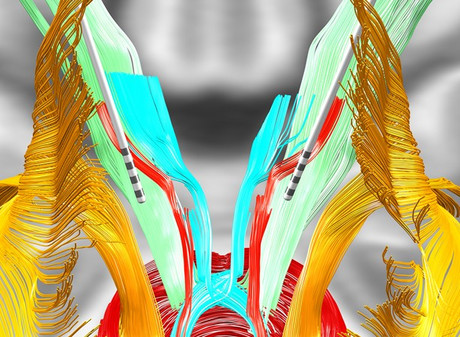 Working with colleagues from Harvard Medical School and Würzburg, researchers from Charité – Universitätsmedizin Berlin have been examining the use of deep brain stimulation in the treatment of Parkison’s disease in an attempt to optimize treatment effectiveness. Specifically, they have been looking at which brain regions need to be connected to the electrode used for deep brain stimulation. The researchers found a way to use brain connectivity (i.e. connections in the brain) to predict the best possible relief of Parkinson's Disease symptoms. The results, describing an effective network profile of deep brain stimulation has been reported in the journal Annals of Neurology*.

Deep brain stimulation (DBS) is an established treatment for Parkinson's disease, usually leading to significant improvement in motor symptoms and quality of life. Symptoms such as movement restrictions, muscle rigidity, or tremor can be alleviated using the neurosurgical procedure which places small electrodes into deep structures of the brain. Whether optimal symptom relief is achieved depends on the correct placement of the electrode. Characteristic connectivity patterns can be observed between the area surrounding the implant and other areas of the brain. “An optimally-positioned neurostimulator disposes of an optimal connectivity profile,” explains Dr. Andreas Horn, a researcher at Charité's Department of Neurology and Experimental Neurology. “High treatment effectivity is associated with strong connections between the DBS electrode and specific frontal areas of the brain, such as the 'supplementary motor area',” says Dr. Horn. This relationship was not previously known.The researchers were also able to show that an electrode's connectivity profile can be used to predict the extent to which treatment can alleviate a patient's movement restrictions. They did so by using a special electrode localization procedure which was developed at Charité in the laboratory of Prof. Dr. Andrea Kühn over a period of several years. The procedure continues to be based on exact brain connectivity maps which were developed in cooperation with Harvard Medical School. The researchers used the MRI sequences of more than 1,000 test subjects to create a 'connectivity map' of the average human brain. Using both of these methods in combination, it is possible to produce connectivity profiles for any DBS electrode. Using basic principles from the field of machine learning, the researchers succeeded in producing and validating an optimal connectivity profile. Dr. Andreas Horn and his international research partners successfully ensured the high-precision placement of more than 90 DBS electrodes.

The researchers are planning to conduct further studies to develop a patient-specific, 'made-to-measure' method of brain stimulation. This may become feasible since it is possible to analyze a patient's specific connectivity profile using MRI training data even before he or she undergoes DBS electrode placement surgery. “It would be possible to determine the optimal location for stimulation even before the invasive part of the procedure starts,” says Dr. Horn. “We are now in the process of developing a complete procedure for connectivity-based deep brain stimulation, which will then need to undergo further validation studies.” At some point in the distant future, this will make it possible to run a computer simulation prior to using the treatment in a specific patient.

The stimulation volume (red), i.e. the area of the brain immediately adjacent to the electrode, which becomes 'activated' when stimulation occurs. Image: Andreas Horn, Charité.

The stimulation volume (red), i.e. the area of the brain immediately adjacent to the electrode, which becomes 'activated' when stimulation occurs. Image: Andreas Horn, Charité.

The stimulation volume (red), the area of the brain immediately adjacent to the electrode, which becomes 'activated' by electrode stimulation. Small arrows denote the ‘electric field’. Image: Andreas Horn, Charité.